Machine learning has expanded rapidly in the last few years. Instead of simple, one-directional or linear ML pipelines, today data scientists and developers run multiple parallel experiments that can get overwhelming even for large teams. Each experiment is expected to be recorded in an immutable and reproducible format, which results in endless logs with invaluable details.

We need to narrow down on techniques by comparing machine learning models thoroughly with parallel experiments. Using a well-planned approach is necessary to understand how to choose the right combination algorithms and the data at hand.

So, in this article we’re going to explore how to approach comparing ML models and algorithms.

The challenge of model selection

Each model or any machine learning algorithm has several features that process the data in different ways. Often the data that is fed to these algorithms is also different depending on previous experiment stages. But, since machine learning teams and developers usually record their experiments, there’s ample data available for comparison.

The challenge is to understand which parameters, data, and metadata must be considered to arrive at the final choice. It’s the classic paradox of having an overwhelming amount of details with no clarity.

Even more challenging, we need to understand if a parameter with high value, say a higher metric score, actually means the model is better than one with a lower score, or if it’s only caused by statistical bias or misdirected metric design.

Comparing machine learning algorithms is important in itself, but there are some not-so-obvious benefits of comparing various experiments effectively. Let’s take a look at the goals of comparison:

The primary objective of model comparison and selection is definitely better performance of the machine learning software/solution. The objective is to narrow down on the best algorithms that suit both the data and the business requirements.

High performance can be short-lived if the chosen model is tightly coupled with the training data and fails to interpret unseen data. So, it’s also important to find the model that understands underlying data patterns so that the predictions are long-lasting and the need for re-training is minimal.

When models are evaluated and prepared for comparisons, minute details and metadata get recorded which come in handy during retraining. For example, if a developer can clearly retrace the reasons behind choosing a model, the causes of model failure will immediately pop out and re-training can start with equal speed.

With the model details available at hand, it’s easy to narrow down on models that can offer high processing speed and use memory resources optimally. Also during production, several parameters are required to configure the machine learning solutions. Having production-level data can be useful for easily aligning with the production engineers. Moreover, knowing the resource demands of different algorithms, it will also be easier to check their compliance and feasibility with respect to the organization’s allocated assets.

Parameters of machine learning algorithms and how to compare them

Let’s dive right into analyzing and understanding how to compare the different characteristics of algorithms that can be used to sort and choose the best machine learning models. The comparable parameters have been divided into two high-level categories:

On a fundamental level, machine learning models are statistical equations that run at great speed on multiple data points to arrive at a conclusion. Therefore, conducting statistical tests on the algorithms is critical to set them right and also to understand if the model’s equation is the right fit for the dataset at hand. Here’s a handful of popular statistical tests that can be used to set the grounds for comparison:

Here’s how Neptune can be leveraged to track hypothesis tests or even to integrate them with project management tools such as Jira:

To choose the best machine learning model for a given dataset, it’s essential to consider the features or parameters of the model. The parameters and model objectives help to gauge the model’s flexibility, assumptions, and learning style.

For example, if two linear regression models are compared, one model might be aiming to reduce the mean squared error, whereas another might be aiming to reduce the mean absolute error through objective functions. To understand if the second model is a better fit, we need to understand if the outliers in the data influence the results, or if they’re not supposed to affect the data. If the anomalies or the outliers must be considered, using the second model with objective function as the mean absolute error will be the right choice.

Similarly for classification, if two models (for example, decision tree and random forest) are considered, then the primary basis for comparison will be the degree of generalization that the model can achieve. A decision tree model with just one tree will have a limited ability to reduce variance through the max_depth parameter, whereas random forest will have an extended ability to bring generalization via both max_depth and n_estimators parameters.

There are several other behavioural features of the model that can be taken into account, like the type of assumptions made by the model, parametricity, speed, learning styles (tree-based vs non-tree based), and more.

Parallel coordinates can be used to see how different model parameters affect the metrics:

Learning curves can help in determining if a model is on the correct learning trajectory of achieving the bias-variance tradeoff. It also provides a basis for comparing different machine learning models – a model with stable learning curves across both training and validation sets is likely going to perform well over a longer period on unseen data.

Bias is the assumption used by machine learning models to make the learning process easier. Variance is the measure of how much the estimated target variable will change with a change in training data. The ultimate goal is to reduce both bias and variance to a minimum – a state of high stability with few assumptions.

Bias and variance are indirectly proportional to each other, and the only way to reach a minimum point for both is at the intersection point. One way to understand if a model has achieved a significant level of trade-off is to see if its performance across training and testing datasets is nearly similar. 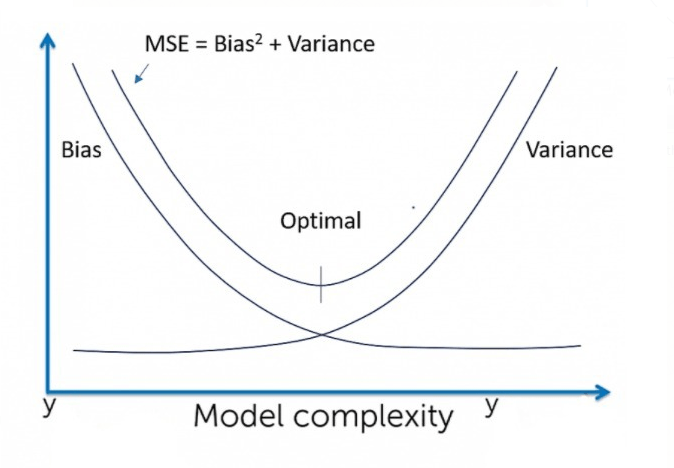 Reaching the optimal point of intersection | Image from Analytics Vidhya

The two most popular learning curves are:

You can see an example learning curve here:

Loss Functions and Metrics for Regression

There are several other loss functions that can be used to optimize machine learning models. The ones mentioned above are the primary ones that essentially built the foundation for the development of the model design.

For every classification model prediction, a matrix called the confusion matrix can be constructed which demonstrates the number of test cases correctly and incorrectly classified. It looks something like this (considering 1 – Positive and 0 – Negative are the target classes):

It can be applied to most generic problems but is not very useful when it comes to unbalanced datasets. For instance, if we’re detecting fraud in bank data, the ratio of fraud to non-fraud cases can be 1:99. In such cases, if accuracy is used, the model will turn out to be 99% accurate by predicting all test cases as non-fraud.

This is why accuracy is a false indicator of model health, and for such a case, a metric is required that can focus on the fraud data points.

Precision is the metric used to identify the correctness of classification.

F1 score is the harmonic mean of Recall and Precision, therefore it balances out the strengths of each. It’s useful in cases where both recall and precision can be valuable – like in the identification of plane parts that might require repairing. Here, precision will be required to save on the company’s cost (because plane parts are extremely expensive) and recall will be required to ensure that the machinery is stable and not a threat to human lives.

ROC curve is a plot of true positive rate (recall) against false positive rate (TN / (TN+FP)). AUC-ROC stands for Area Under the Receiver Operating Characteristics and the higher the area, the better the model performance. If the curve is somewhere near the 50% diagonal line, it suggests that the model randomly predicts the output variable.

Metrics and loss plots displayed in Neptune for a particular experiment. Can be tracked for both training and validation sets

Using filters on metrics or loss charts on Neptune

See F1 Score vs ROC AUC vs Accuracy vs PR AUC: Which Evaluation Metric Should You Choose?

Until now we observed the comparable model features that take precedence in the development phase. Let’s dive into a few production-centric features that accelerate the production and processing time.

Depending on the use case, the decision of choosing a model can be primarily focused on the time complexity. For example, for a real-time solution, it’s best to avoid the K-NN classifier since it calculates the distance of new data points from the training points at the time of prediction which makes it a slow algorithm. However, for solutions that require batch processing, a slow predictor is not a big issue.

Note that the time complexities might differ during training and testing phases given the chosen model. For example, a decision tree has to estimate the decision points during training, whereas during prediction the model has to simply apply the conditions already available at the pre-decided decision points. So, if the solution requires frequent retraining like in a time series solution, choosing a model that has speed during both training and testing will be the way to go.

Citing the above example of K-NN, every time the model needs to predict, it has to load the entire training data into the memory to compare distances. If the training data is sizable, this can become an expensive drain on the company’s resources such as RAM allotted for the particular solution or storage space. The RAM should always have enough room for processing and computation functions. Loading an overwhelming amount of data can be detrimental to the solution’s speed and processing capabilities.

It’s easy to keep track of the resource usage of different experiments through Neptune’s user-friendly dashboard that helps in organizing ML experiments:

Details of memory displayed for all recorded experiments | Source

The ability of parallel processing is a boon for time-taking algorithms like K-NN, where distance calculation can be distributed across several machines. Also, the random forest model can benefit from parallel processing by distributing the estimators/trees. However, for certain machine learning models which are designed to be sequential, like gradient boosting, parallel processing isn’t possible since the result of one tree needs to be fed to the next one.

There’s no scarcity of comparable techniques to gauge the effectiveness of different machine learning models. However, the most important but often ignored requirement is to track the different comparable parameters such that the results can be confidently used and the chosen pipelines can be easily reproduced.

In this article, we explored a few popular methods for comparing machine learning models, but the list of these methods is much bigger, so if you didn’t find a good method for your project, keep looking!

A Content Marketing and AI Enthusiast. Her mission is to help AI-based companies build brand awareness and capture the huge market of netizens through high-quality content, be it an informative Blog or an educational Podcast!

3. Add logging to your script